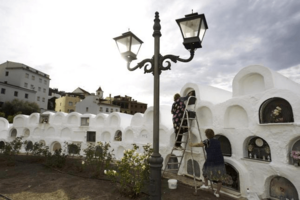 On the eve of the Feast of All Saints, the cemeteries of Spain are filled with people who clean and tidy the niches and tombstones of their loved ones, a panorama that is not alien to one of the most singular fields of the country, that of Sayalonga (Málaga), the only one with a round shape.

Valentin Fernandez, tourism technician of the City of Sayalonga, told Efe today that the romantic theory to explain the round shape of the cemetery is that the builders wanted the people buried there not to turn their backs.

However, according to Fernandez, the thesis that is most important today is that from the cemetery you can see the tower of the church of Santa Catalina, which is octagonal, and the cemetery "would have been built imitating this structure, since they could be executed by the same person. "

However, regardless of the theory that is given to justify its form, Fernandez has argued that it is a "symbolic cemetery, which was intentionally made simulating an octagon, a symbol widely used, even by Freemasonry, in the century XIX ".

Recent research confirms that it is "a symbolic cemetery, perhaps the only symbolic of Spain," he added.

Another peculiarity of the round cemetery of Sayalonga, a municipality of about 1,500 inhabitants located in the interior of the Axarquía of Malaga, is that its niches were built domed and one above the other, so that they resemble a "white honeycomb" of bees ".

Each family was united for their eternal rest in a certain area and the wealthiest tried to demonstrate their economic and social power with a slightly richer construction, although all within a great simplicity, "which is what gives true originality to this space, "said Fernandez.

This enclave receives some 3,000 visitors a year and also has an interpretation center about its origin.

Since the eighties of the last century this cemetery has not been used, which has at its center several rows of niches with a square structure and similar to those of other cemeteries, which were made around 1950.