The little path of the King 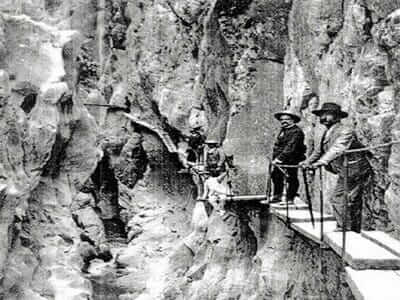 The Hydroelectric Society of El Chorro, owner of the Salto del Gaitanejo and the Salto del Chorro, needed access to both to facilitate the passage of the maintenance, material transport and surveillance operators. The works began in 1901 and they ended up in 1905. The road started along the railroad tracks and traveled the Desfiladero de los Gaitanes. In 1921 the king Alfonso XIII went to the opening of the Dam of the Guadalhorce crossing the previously constructed road for it, or at least visited it. From this moment he began to call Caminito del Rey. 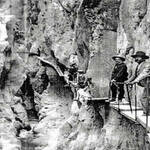 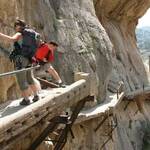 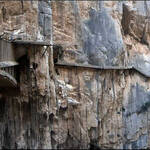 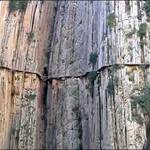 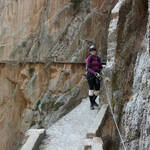 The passage of time and the abandonment of its maintenance made a dent in the Caminito: in the 90s it presented a lamentable state, with the railing disappeared in almost all its route, numerous sections collapsed and those that were threatening to do so. It was precisely his danger that was one of the factors that contributed to his fame. Many hikers headed to El Chorro to tour the Caminito (although also for its climbing area, one of the most important in Europe). This led to numerous accidents (some mortals) over the years and increased its black legend.

Caminito del Rey Hikers crossing the road with the train track in the background.

In 1999 and 2000 two fatal accidents that cost the lives of four hikers induced the Junta de Andalucía to close the accesses to the road, demolishing its initial section. This measure did not stop the hikers, who were still finding ways to access it by climbing. They also decreed a fine of 6,000 € to travel so much along the cut path 3 as through the tracks and tunnels of the train through which you can return from Caminito.4

The Diputación Provincial de Málaga, in collaboration with the Junta de Andalucía, has included in its budgets the 2006 a restoration plan.5 6 In January of 2009 The drafting of the project went out for repair7 whose budget is estimated at 18 million euros.8