The most significant industry of Vélez-Málaga is the manufacture of cooked land for construction (tiles, tile and brick factories), there were about forty tiles that made the typical solid bricks called mazaríes.

This craft of Moorish tradition that in Vélez-Málaga are from the Muslim era, determining the use of clay soil as constructive material throughout its history.

For almost 2000 years, bricks have been manufactured in Vélez-Málaga, from then until now, the activity of the tiles has known more flourishing stages than others. 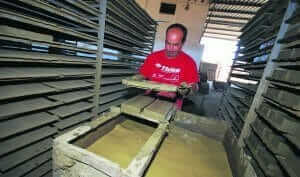 The history of the vejaños tejares is little known, except recent news stories that call attention to the loss of these facilities and a very comprehensive study, the bulk of the information is restricted to direct communication from the owners.

In the last years it maintained a production destined mainly to the brick today known like rustic, for its use in ornamentation and works of restoration of historical buildings, but the hegemony of the new materials and the norms relative to the environmental contamination have supposed the endangerment of a millennial trade "the tejero".

Once the history of the tiles is reviewed, I will focus on describing how they were and are the tiles and the work that took place in them, specifically my brother, "I was also tejero".

In the tile were made by hand, solid bricks "Pilasters" and tiles of different sizes, the most popular were 30 x 30 and 40 x 40 to the latter are called "Mazars", which I will explain later how they were made.

In all the products used, basically water, clay and ground shale. Obtaining the materials is not a complicated task. First, the clay is extracted from nearby quarries. 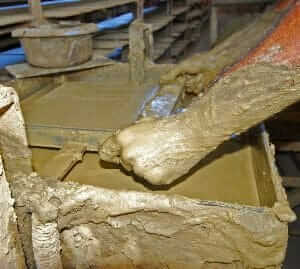 The water was taken from a well and lime was once used, but nowadays ground slate is used and the elaboration of the clay to manufacture the materials is mechanized, I explain to you how it was done manually.

Once obtained the clay and the water, and the file screened to avoid the stones they mixed and kneaded in a "Pila" pool. For this, several people were inside and with their feet and hands it was winter or summer, with their hands and everything was mixed well. Once kneading, the dough was loaded "Barro" in a handcart and carried to the era "Mulch" where the different products were manufactured, nowadays they are made standing by placing the materials on shelves to dry and then its subsequent cooking, but before everything was done on the ground.

To make the bricks and solid tiles, some molds were used, called "Gaberas", in the form of a wood or aluminum box without a bottom. The mold was placed on the ground, filled with the dough and compacted well this is called "Cut", then removed the cast mold and were the bricks, or tiles, lying on the floor.

When the materials were drying the edges were removed with blades this was called "Scrape" that for the tiles and the pilasters were put on edge and with the hands were reviewed their contours was called "Cantear", also to finish the process of drying they were raised so that the air finished drying and to avoid the humidity of the ground this was called "Empalomar"

Then they were picked and put in the ovens for cooking.

The oven, traditional Arab or Moorish, is like a kind of room without roof of about 2x2m of surface and about two meters of height. The floor has holes through which the heat entered. Under this era where wood is thrown and romanized they got a good flame to produce the necessary heat. By way of comparison, it would be like that of a baker but of larger dimensions.

It also has a door on one side that reaches up through which you enter to fill it with brick or earthenware. Once the furnace was filled to the top, the roof was sealed with brick rubble. This was done to avoid heat loss.

Likewise, to avoid this detriment, the door was sealed with bricks and mud. After remaining in the oven for 48 hours straight day and night, they were taken out of it and piled up in the era, waiting to be sold