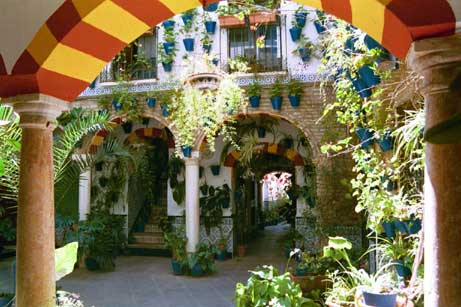 Due to the dry and hot climate of Cordoba, the inhabitants of the city, first the Romans and later the Muslims, adapted the typology of popular house to the needs, centering the house around a patio, which normally had a fountain in the center and in many occasions a well that collected the rainwater. The Muslims readapted this scheme by entering the house from the street through a hallway and placing abundant vegetation to increase the feeling of freshness.

There are two clear types of patios: A first of a single-family house where the rooms are distributed around it. It is usually cloistered and the floor is paved or paved mosaic. A second, from the house of neighbors, nowadays less popular, from where you can access the houses. It usually has two floors, with which the patio is enriched with continuous balconies, staircase and roof. The floors are usually paved. The well is common instead of the common fountain and laundry.

Where they are located? 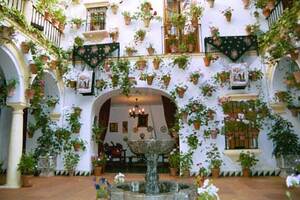 The most characteristic neighborhood is that of the Alcázar Viejo, between the Alcázar and the parish of San Basilio, although we also find them in the neighborhood of Santa Marina, around San Lorenzo and La Magdalena. In the surroundings of the Cathedral Mosque, the Jewish quarter also presents examples of great beauty and antiquity. The most beautiful exponent is found in the Palacio de Viana, which offers twelve different courtyards. 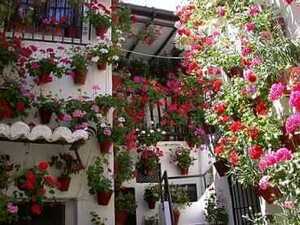 Since 1921 the City Council organizes during the first fortnight of May a contest Patios, in which the owners of these embellish their homes with eager to get the prestigious award offered by the Consistory. At the same time there is a festival with numerous folkloric performances where the best singers and dancers of the earth meet. All this accompanied by the wine Montilla-Moriles, fine of the land with typical tapas.