The SPANISH SHIPWRECK THAT CHANGED THE STORY OF THE UNITED STATES. 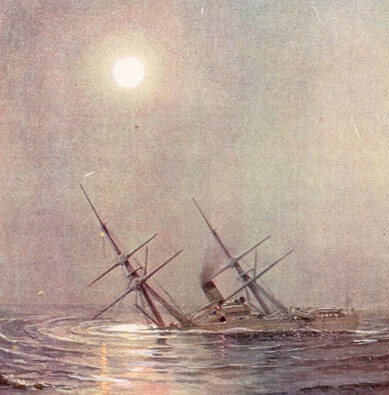 A few days ago the great news that the United States Court of Appeals had ruled in favor of Spain for the case of the spoliation of the remains of the Spanish war frigate Nuestra Señora de las Mercedes, sunk by the English, jumped to the press on the coast of Portugal in 1804. The Odyssey group had taken from the wreck its enormous treasure composed of 500,000 gold and silver coins among other things. These favorable rulings have been occurring since the Supreme Court of the United States ruled in favor of Spain in the case of Juno and Galga not many years ago. Both were ships of the Spanish Navy that sank on the coasts of the United States. The basis of all these judgments lies in the fact that these vessels were vessels owned by a sovereign state, not private individuals, and that the property of the states is never lost. In this way the nations in which these sentences are produced protect their own submerged heritage in the process. The theory of sovereignty in its purest state. There are other very interesting and curious reasons too that not to be excessively tidy another day I will detail.

The last time a Spanish treasure ended up in the hands of private individuals was in 1993 when a fisherman unwittingly discovered the remains of the Spanish war brig "Hunter" sunk in the mud at a depth of about 90 meters and 50 miles off the coast of Louisiana It is an incredible story and the Yankee historians know this shipwreck as "The wreck that changed the World", The shipwreck that changed the world.
On January 11, 1784 the brig of the Spanish Armada "Cazador" sailed from the port of Vera Cruz in Mexico to New Orleans. In his cellar he transported 450,000 pieces of silver known as pieces of eight (eight reales). The Spanish ship disappeared without a trace. Nothing was ever heard from either the Hunter or his treasure.

Carlos III had ordered to send the Hunter to the then Spanish colony of Louisiana to try to stabilize his economy, then in open bankruptcy, having tried that in the same one it worked without success the paper money. The treasure of the Hunter would have stabilized the Spanish monetary system in the Spanish possessions in North America. Apart from the crisis of paper money, the Spanish colonial economy was in the last for almost three centuries of discoveries, wars, conquests and a terrible administration by corrupt, inept and imbecile kings and viceroys. Carlos III was convinced that the hunter's treasure would have brought stability to his colonies. But it could not be. The disappearance of the Hunter contributed without a doubt to the total economic weakening of the colony and in 1800, Carlos IV yielded the Louisiana to France. Three years later the colony was sold by Napoleon to President Jefferson for an amount close to fifteen million dollars. Anecdotally we will say that with the purchase of Louisiana the size of the United States doubled. Yankee historians love to speculate on what would have happened if the Hunter had come to port. Personally, I think it's bullshit ... but good.

On August 2, 1993, a New Orleans prawns fisherman named Jerry Murphy, commanding a fisherman named "Mistake" (error, which has noses the thing) to collect the fishing gear that dragged by the bottom could check that Apart from prawns, some strange stones were attached to the net. They were neither more nor less than handfuls of silver coins joined by marine concretions. Two hundred years after his disappearance, the remains of the Hunter had been discovered. Murphy, shrimp fisherman of the Mississippi (like Forrest Gump but more foolish), never went back to fishing prawns. The property of the coins was granted by Judge Adrian DuPLantier to Murphy and his partners in the Eastern District Court of Louisiana. Apart from the coins of the hunter's wreck, many and very valuable pieces were recovered, such as weapons, remains of uniforms, navigation instruments, etc. Fortunately, it was the last time such an event has occurred.

I had the great good fortune to personally see part of this treasure in Key West, in the office of lawyer Paul Horan who defended and won the subject. Horan represented us in the subjects related to the investigations that we carried out of the remains of the Valbanera and talking about Spanish shipwrecks, he took from the table of his office a chest full of silver coins from the hunter's cargo.

In my collection of shipwrecks I have two of these pieces of eight. They are gorgeous. They have a legend that says: 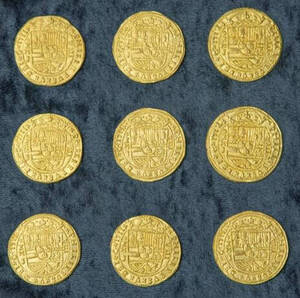 My thanks for letting this story include my dear friend Fernando José García Echegoyen. A little of his biography recounted by himself:

I am a naval researcher specialized in the field of shipwrecks and underwater archeology. I have published 4 books on the subject. I currently prepare three more. I have been working for 20 years investigating some of the most important shipwrecks in the last 200 years of maritime history in Spain. Continuously I work as an advisor for different publications on these topics. I have directed three expeditions to the Caribbean to try to unravel the mystery of the shipwreck of the Spanish transatlantic Valbanera, sunk with all its passengers and crew in September 1919. In 1992 for the first time since its collapse, I managed to film and photograph the remains of the Spanish rider. I live in Antequera (Málaga) and I work all over Spain.

All the rights of Fernando Garcia Echegoyen, my dear schoolmate and who has his Facebook page Naufragios.es