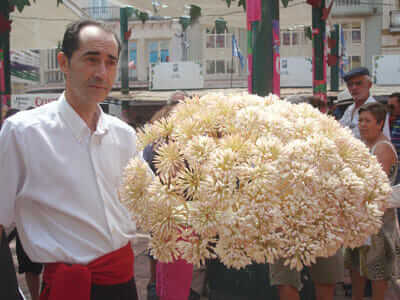 It is popularly known as biznaga to the bouquet of jasmines in the shape of a ball of laborious elaboration that in summer are usually sold in the streets of Malaga (Spain).

In addition to its beauty and its perfume, it is said that the biznagas serve to scare off mosquitoes on summer nights.

The biznaga is, together with the Cenachero and the anchovy, one of the popular symbols of the capital of the Costa del Sol. As an example of this, the Biznaga de Oro is the main award at the Spanish Film Festival of Malaga.

While the seller of biznagas was represented in the statue of the biznaguero of Jaime Fernández Pimentel that is in the Gardens of Pedro Luis Alonso.

Making of the biznaga

Months before summer, a species of wild thistle is harvested when it is still green, which will serve as the skeleton of the 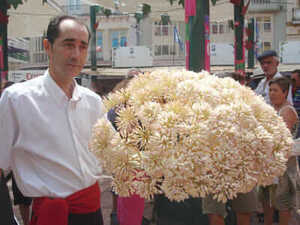 biznaga. After removing the leaves and branches that are left to leave only the main stem and its corresponding spikes, let it dry until it gets a beige color and gets hard. Next, the stem and tips are trimmed. The jasmines are collected on summer evenings before they are opened so that it is easy to introduce them one by one on skeleton skewers. At night these jasmines will open giving thus the characteristic shape of the biznaga and its smell.

The biznaguero carries the biznagas on a penca (leaf of prickly pear cactus) stripped of all its spikes, used as a base to place the biznagas. This is the traditional presentation for later sale.