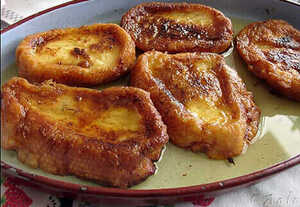 La torrija is a traditional Lenten sweet that consists of a slice of bread (usually several days old) that is soaked in milk or wine and, after being coated in egg, is fried in a pan with oil; finally, aromatized, to taste, with various ingredients: cinnamon or some liquor, and sweetened with honey, syrup or sugar. It is a food of humble origin that soon saturates the diner and keeps him relieved from the need to try another dish of meat (food subject to abstinence in Lent).

Its association with Lent is perhaps due to the need to use bread, which, during the time when meat could not be eaten, was therefore less consumed, although families made the same amount.

As breakfast or snack is ideal as it provides energy.

The milk is cooked together with a cinnamon stick and the peel of an orange and / or lemon.
Let stand until cool.
Add the sugar stirring to dissolve.
Cut the bread into slices.
To place in a source to soak together with the milk and the cinnamon in branch, the sugar and the orange peel, until it is well soaked, but taking care that it does not undo.
Beat the eggs
Drain the slices very well drained from the milk
Batter in the beaten eggs and in a frying pan with abundant oil fry them.
Drain in a dish covered with paper towels to discard any excess oil.
Still warm, sprinkle with powdered sugar and cinnamon previously mixed.