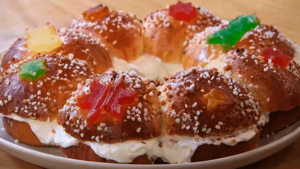 In Spain since time immemorial, when the day 6 of December is inaugurated and after the opening of the gifts that the Magi leave to children and adults, it is a tradition that they have breakfast with the Rking of kings.

The origin of the roscón seems to be related to the Roman saturnalia, although at present some relate it to a complementary and edible representation of the advent wreath, Even though the tradition of the advent wreath is much later in Spain, this relationship is very doubtful. These were festivals dedicated to the god Saturn with the aim that the Roman people in general could celebrate the longest days that began to come after the winter solstice. For these celebrations, round cakes were prepared with figs, dates and honey, which were shared equally between commoners and slaves. Already in the third century, a dry bean was introduced inside the sweet, and the lucky one who touched him was named king of kings for a short period of time established beforehand. From the Romans there were bean games in the Iberian Peninsula.

Stuffed with chanttilly cream, chocolate cream or truffle, angel hair or without filling is one of the cakes that are never missing in Spanish Christmas.

Documentation and more information in Wikipedia