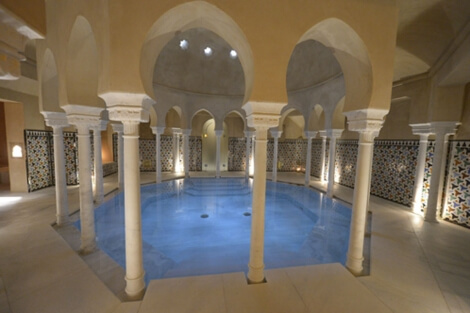 The other day I had the pleasure of meeting the person in charge of the commercialization area of the Hamman Al-Ándalus of Málaga in a few days sponsored by Andalucia.org and she was telling me where they came from and where they were going, since I was totally captivated by the beginnings of this Andalusian company.

Later I had the opportunity to visit the facilities and, enthralled, I proposed to expand the information that we published at the time Hammam of Córdoba.

Located in the historic center of the city, Hammam Al Andalus is a recently restored monumental space that collects the essence of the ancient Arab baths of Al Andalus.

Its hot, cold and hot water springs are part of the purification ritual and together with the steam rooms, rest and massages constitute an architectural ensemble characterized by a beautiful Nasrid decoration that induces the relaxation of mind and body.

Carefully decorated, with the guidelines of the Nasrid tradition, its coffered ceilings, arches, murals and mosaics, beautiful skylights and delicate lattices stand out, as well as an impressive vault resting on arches and columns, crowns the central spa. In Hammam Al Ándalus, the heritage of an old tradition is merged with a pioneer building in Spain, as it is the first and only one that has a modern geothermal energy system that sends the water 150 meters deep to achieve the ideal temperature of the water and the environment.

The Hammam Al Andalus Málaga opens its doors in 2013, after several years studying and elaborating a detailed and careful architectural project of Nasrid inspiration. The chosen enclave is the Plaza de los Mártires, in the middle of the museum area of Málaga, in a building that housed an old oven located next to the Mudejar tower of the Church of the Holy Martyrs.

The Hammam has four rooms with water springs at different temperatures: the warm room and the relaxation room have a temperature of 36ºC, the hot room of 40ºC and the cold room of 18ºC. It is advisable to make a tour that provides the body with a contrast of temperatures, starting with the warm room that is at body temperature and interspersed with the cold room and the hot room; between the different rooms you can make short stays in the steam room. The tour is free and lasts ninety minutes in which the massage is included in case of being hired.
Upon arrival at the reception you will be given a brief explanation about the Hammam and its rules of use.

We provide a towel and in the case of hiring massage you will also be provided with a plaster. In the changing rooms you will find a hair dryer, combs and lockers to store your personal belongings, and in the showers you have gel and shampoo.