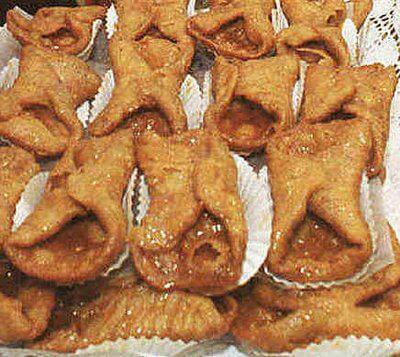 Lpestiños They are typical Andalusian sweets that are prepared at Christmas and during Holy Week. It seems that they were already done in Islamic Andalusia. In fact, in Morocco there is a similar sweet called Shebbakia and that, in all probability, was taken by the exiled Andalusians.

Put a frying pan with 1/2 a glass of oil, put the lemon peel and let fry lightly, then remove from the heat and add the matalauva and the sesame, let the oil cool, strain and reserve. In a bowl put the flour, a little cinnamon, the oil and the wine.

Knead everything well until you get a good dough. Then let it stand for 1 hour.

After resting the dough we put it on the floured countertop and stretch it with the roller wet in oil, we stretch it well, it is thin.
Cut with a square knife of 10 cm. and roll the squares joining the opposite ends. Fry the pestiños in a pan with plenty of hot oil.

Personally, I smear them with honey, but there are those who, while still hot, embroil it with sugar.

Courtesy of Mysteries and History of Andalusia