Route of the great cliffs (Cádiz) 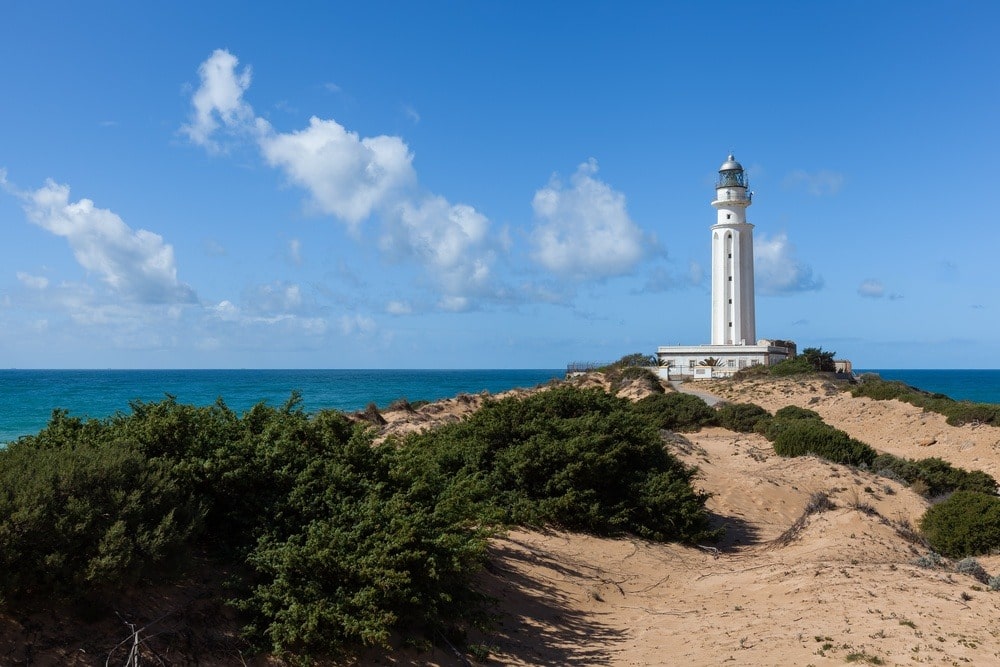 Between Barbate and Caños de Meca rise the most colossal cliffs of the Andalusian coast. Over them has grown a Mediterranean forest pregnant with pines, rockroses and junipers. To visit these places is to go back to history with just admiring its watchtowers and its legendary Trafalgar lighthouse.

At the end of the 19th century, the residents of the region decided to stop the advance of the sandy and dry lands that the ocean was dragging. For this, they reforested the coastal strip that extends between Barbate and Los Caños de Meca. Over the threatening cliffs of the coast planted stone pines, eucalyptus and Aleppo pines. For this reason, what we now call the Natural Park of La Breña and Marismas de Barbate is nothing more than an artificial forest with something over a hundred years old, miraculously preserved and with a greater ecological value for each day that passes.

The park is not just a pine forest. Its coastal strip and its fearsome cliffs of more than one hundred meters high treasure a flora and fauna of incalculable value. The smallest protected natural space in Andalusia -2,957 hectares, of which 940 correspond to its one-mile stretch of sea-encloses trails and paths where the smell and light are exquisite travel companions. The cliffs are stuffed with nests of seagulls, jackdaws and cattle egrets, the only colony that still remains along this southern coast. The heavens of the interior fly over it predatory like the kestrel, the hawk and the owl. During your walk, the walker will hear everywhere the cuckoo's song. The fox's footsteps will be habitual, as well as the possibility of encountering some chameleon, some oceanic lizard or all kinds of colorful lizards.

The Hierbabuena beach is at the exit of Barbate, halfway between its marina and the first cliffs of the natural park. From this white sand arch, a path climbs up to the entrance of the park. Sabinas and sea lilies adorn the mobile dunes that grow up to a palisade area where fresh, clean water flows from a fountain. Despite the dryness of the surface, the basement of the park is perforated by underground channels that pour their waters through pipes and springs until bursting in the Atlantic cliffs.

Coronado the first stretch of scrubland, the trail enters the pine forest and joins a major road that comes from the road that connects Caños de Meca and Barbate. Parallel to the coast, meandering over the cliffs, the path is protected by a series of fences and parapets at the most dangerous points. We will find first an abandoned mill, built at the beginning of the 20th century to take advantage of fresh water of the pipes. Two hundred meters later we will find a demolished house, the old house of the millers, next to two abandoned posts for the surveillance of the coast.