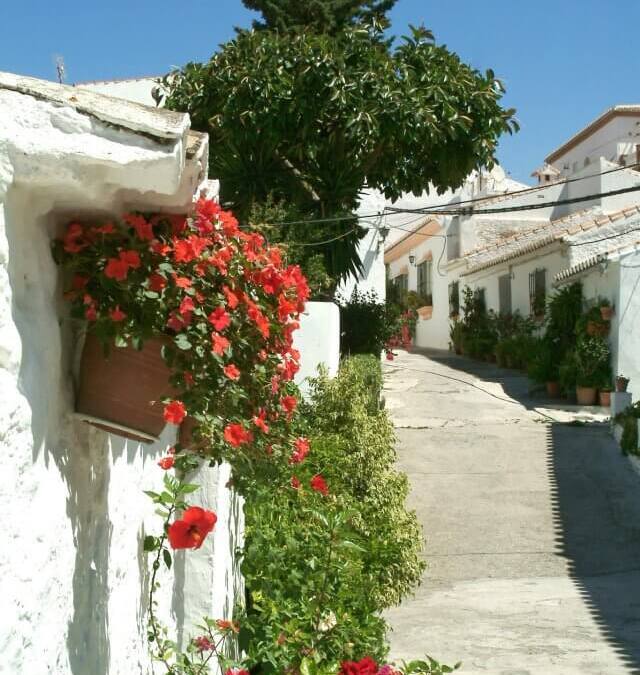 Heading north from Torre del Mar, I entered inland Axarquía. I decided to bypass Vélez-Málaga, the capital of the region, and pushed further into the countryside as the road climbed higher into more rugged terrain. Once famous for its bandoleros or highwaymen, the Axarquía is now more renowned for its beautiful scenery, pretty white villages, strong local wine and good walking. The hillsides and deep valleys with their rich soil have been terraced since Mulsim times and are home to olive, almond and vines. As I took in the scenery, the busy beaches I had left behind just minutes before were long forgotten.

My first stop was Archez, a tiny, quaint, white village – the first of many I was to wander through during my two-day sojourn in the Axarquía. Hiding in the foothills of the Sierra Almijara, Archez is a lovely village with strong Moorish roots. Parking the car, I walked through the narrow streets, passing cats lazing in the sunshine, to find the church of Nuestra Señora de La Encarnación whose tower is proof of the village’s history. Dating back to the fourteenth-century, the tower was once the minaret of a mosque and its intricate tiling and sebka brickwork make it one of the best examples from the period. Like many villages in the Axarquía, time seems to have stood still in Archez. The local shop is one of childhood memories selling everything you could ever think of and only the odd satellite dish reminds you that you are actually in the 21st century.

Leaving Archez, I crossed the river and headed to Salares, a centre of olive oil and wine production. A young goatherd and his flock of bleating goats with jangling bells were blocking the road and I had to slow to a stop to let them pass; an event that happened often over the next two days and one that was a constant reminder of the slower pace of life in these mountains.

Salares is truly beautiful; a dazzlingly white, picture postcard village. Its narrow streets are closed to traffic, (although I doubt very much that anything bigger than a mini would fit down most of them), and people live alongside ruined tumbled down houses. As I walked down a steep pathway into the village, I passed a man carrying a hod full of bricks. He was busy renovating one of the old houses in the village – a hard task as all materials had to be carried in and out – but well worth the effort to obtain luxury living in such a peaceful environment.

I headed out of Salares, through more lovely scenery, to Arenas, where, I had read, there was a ruined Moorish castle atop a hill which afforded panoramic views of the area. I asked in the village and a kind local explained that I had just passed the turn off for the Castillo de Bentomiz…. or at least I think he did. The Spanish is heavily accented in these parts and with ears trained to the more coastal variety; it was touch and go whether I had understood him correctly. As my little car bounced violently along the track, I could see no sign of a castle anywhere and feared that I had been sent on a wild goose chase but moments later I spotted the ruins and, parking the car, scrambled up a slope to the old castle walls. The scene before me was just stunning. Gnarled almond trees shaded a carpet of wild flowers – most of them bright red, delicate poppies – and I climbed the last part to sit atop what was once a true stronghold of the Moors. The Axarquía stretched out all around me; huge mountains, clusters of white villages, the far off Mediterranean, and in the foreground the fantastic floral display. Whilst clambering around, I had my eyes peeled for chameleons as they are said to be more abundant around Arenas than anywhere else in Spain but the disguise masters of the lizard world were too smart for me and I didn’t spot a single one.

Time was marching on, so I reluctantly left the peace and quiet of the old Castillo and retraced my steps back through Archez to take the road to Cómpeta. Famous for its wine, Cómpeta is yet another “Kodak moment” village. White houses tumble down the mountain with terracotta roofs vying for space and the old tower rising above it all in true majestic fashion. It is not surprising that Cómpeta has become such a firm favourite for European visitors and the town has seen an influx of residential tourists over the last several years. If you happen to visit during August, be sure not to miss the Noche del Vino (15th) when the village quite literally goes to town. The area’s Moscatel grapes, renowned throughout the whole province, are honoured when hundreds of barrels are rolled out to satiate the thirst of the revellers in the Plaza de la Almijara.

The next morning I headed for Alcaucín, passing the ruins of the deserted medieval village of Zalía – its fortress, one of three (including my beloved Bentomiz) that formed a defensive triangle in Moorish times. I had coffee in Alcaucín, near the Fuente San Sebastian, a fantastic five spouted fountain restored to its former Moorish glory and fed by one of the many natural springs found in these mountains. There are lots of smaller fountains in the village, all fed by mountain springs and still very much in use by the local population.

Driving to the northern edge of the region, the scenery becomes even more arresting. The Boquete de Zafarraya, a huge cleft in the mountains, is the gateway out of the Axarquía towards Granada and in 1983, remains found in one of the caves near the pass have confirmed that this area was the latest-known site in Europe inhabited by Neanderthal man. A sobering thought as I drove through the Zaffaraya some 30,000 years later. I skirted the northern boundary, through grey, rocky terrain and entered the Axarquía again, passing through the hamlets of Alfarnatejo and Alfarnate. The main claim to fame of Alfarnate is the venta on the outskirts of the town that maintains to be the oldest inn in Andalucía. The venta is also a museum, paying homage to its past patrons including famous outlaw Luís Candelas and the most feared bandolero of all, El Temporillo. On arrival at the restaurant in the 1820’s and on hearing that there were no more spoons for him to eat his soup, Temporillo put a gun to the heads of the other diners and ordered them to eat their spoons, cracking a few teeth into the bargain. Today thankfully, the bar and restaurant with its pleasant terrace provides an ideal rest stop whilst touring the region.

I went next to Comares, another fantastic village perched high atop a conical hill, and, like most in the area, it has deep Moorish roots. Built over Roman foundations, the ruined Muslim fort was one of the strongholds of rebel leader Ibn Hafsun (along with Bobastro) and the innovative tourist board have laid little tiled “feet” throughout the town to mark out a route where boards tell the tales of old. Near the Ayuntamiento building, the views offered by the mirador over the whole Axarquía are nothing short of spectacular.

Time to head home. I re-traced my route back to Colmenar, a centre for honey production and the Axarquía’s most westerly point and followed the route to Málaga. The road winds its way through cork, oak and pine forests, through the Puerto del Léon to the coast and in its latter stages offers great views of Málaga city and the Costa del Sol. I hit Málaga in the rush hour and came back to earth with a bump! I missed the calm of the mountains within minutes and longed to be back wandering the little lanes of the white washed villages. To escape the hustle and bustle of the coast for just a couple of days had been a tonic and one that I highly recommend.